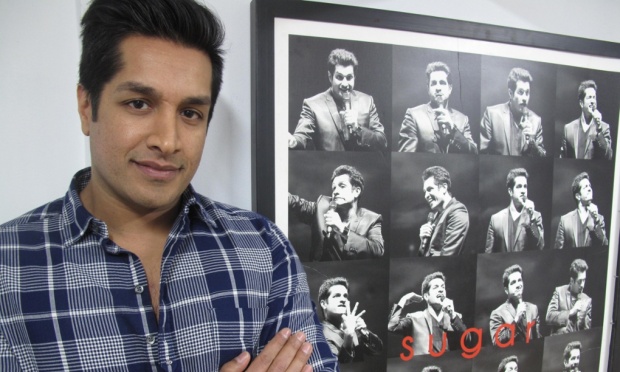 Sugar Sammy: the Canadian getting death threats for his 'Frenglish' comedy

Bilingual stand-up comedian Sugar Sammy has been called a francophobe, a federalist bully and a traitor in Quebec. And yet, his show has been sold out in the French-Canadian province since its launch in 2011.

Sugar Sammy is a provocateur. The Montreal-born comedian likes to incense French speakers in Canada's Quebec region, going as far as flouting language laws to do so.

Sammy always knew that he would not be received with open arms by creating the first bilingual show in the province's history, nor by by poking fun at the separatist movement – a sacred cow amongst the predominantly French-speaking artistic community. But the death threat he received last December was publicity he could have done without.

The venue where he was due to perform in Sherbrooke, 150km east of Montreal, received an anonymous call warning that “it would happen tonight” for the “federal clown”. Given that Sugar Sammy's brash federalist stance has made him the target of regular abuse on social networks, his management team did not take it lightly.

Two months later, as he sits with arms outstretched in the wings of the Olympia theatre in Montreal where he performs weekly, his expression darkens while recalling the incident.

“I definitely didn't want to cancel that evening because this is what the caller wanted”, explains the charismatic 38-year-old. “The police didn't find anything on the premises so we went ahead but with added security, keeping the public's safety in mind.” As he took the stage, dozens of police officers stood on guard in the hall and backstage. Instead of meeting his fans afterward, a routine he revels in, he left town immediately with a police escort.

Sammy, a Mcgill university graduate, grew up watching American comic heroes Eddie Murphy and Don Rickles, and so embraced their language for his career. But once on the streets of Montreal, he would naturally mingle it with French.

He tried to emulate this reality by writing his show in “Frenglish”, the colloquial term for mashing up French and English in conversation. He could not understand why a habit so commonplace was never depicted in the local media. “For years I had this material about the clash between both linguistic cultures and the comedy that unfolds when they get lost in translation. I wanted to put it out there before someone else did, because this is so who I am. ”

The Montrealer, born to modest Indian immigrant parents, felt the timing was right after returning to his hometown from a highly successful international tour. For six years, he had travelled non-stop from South Africa to Dubai. He had an HBO special under his belt and had been named one of the top rising humourists by The Hollywood Reporter.

And yet, Sugar Sammy was relatively unknown in his birthplace – a phenomenon not that uncommon in a city where anglophones and francophones rarely venture deeply into each other's cultural territory. Hence why the two communities are often nicknamed the “two solitudes”.

Mastering the lingua franca since his days at French school – the result of a compulsory government scheme for all children of immigrants born in Quebec - he decided to set out to conquer his toughest public yet: the Franco-Québécois, who represent 78% of a population of 7.6m. As he explained in November 2011 at the launch of his show You're Gonna Rire, he had intended to build a bridge between the “two solitudes”… and then “set fire to it”.

His 90-minute routine pokes fun at the city's cultural communities, from Haitians to Italians, fellow sons and daughters of immigrants he befriended while growing up in his native multi-ethnic neighbourhood of Côte-des-Neiges.

But his nastiest jibes are aimed at separatists, whom he portrays as under-educated bigots. At one point, he recounts debating with a francophone graduate who passionately defends the educational level of nationalists. After a while, he tells the audience, he says to his interlocutor: “Just please serve me my Big Mac and we can talk after your shift.”

What was predicted by experienced producers as a career suicide turned out to be a gold mine: both his bilingual and French-only show – created for the predominantly francophone regions - have sold 300,000 tickets and are due to continue until June 2016.

This was helped by his flair for stunts. Sammy deliberately broke Quebec's language laws by posting an English-only advert in the Montreal subway in Autumn 2014. “For Christmas, I'd like a complaint from the Office de la langue française,” said the sign, referring to the province's language watchdogs.

Montreal lawyer François Côté rose to the bait, filing a complaint and explaining in the media that Sugar Sammy's advert was a “declaration of war” on the founding principle of the Bill 101. Voted in 1977, this law made French the official language of the province and thus mandatory in commercial signs. The comic responded by blacking out the English words and bragging about getting the extra publicity he asked for Christmas.

This was a joke too far for the nationalist Saint-Jean Baptiste Society. Its president, Maxime Laporte, claimed on television that Sugar Sammy was fuelling francophobia. Sammy, who also speaks Hindi and Punjabi, never expected the reactions to this particular advert to be so emotional. “None of my intentions are hateful”, he insists. “It's all done tongue in cheek.”

It has however allowed some in the media to depict him as a federalist bully. On 24 November, 12 days before the death threat in Sherbrooke, a popular columnist from the tabloid Journal de MONTRÉAL criticised his fans for acting as “contented cuckolds.” “They are happy to applaud those who scorn them”, wrote Mathieu Bock-Côté.

The cause of this outrage is not completely lost on Sammy: his political stance breaks a taboo. “I'm the first person in the local show business industry that proudly claims to be a federalist”, he says. “I think a healthy society is pluralistic, it tolerates different opinions.”

“I always say my favourite country is Canada, my favourite province is Quebec, my favourite city is Montreal. To some people, just saying that is treason”, he continues. “Why not state a different point of view, one that celebrates multiculturalism and federalism? Many Quebeckers share it but it is nowhere in the media. And dare I say, the majority of the population is not sovereignist if you look at the polls these days. I represent the quiet majority.” Indeed, the latest poll conducted in March 2014 indicates that about 40% of voters would like to separate from Canada.

In many respects, Sugar Sammy's material would have never seen the light of day if it weren't for the 1995 referendum on Quebec's independence.

At the time, the then student worked as a scrutineer for the federalist “No” campaign. That tense evening, the “Yes” camp came within half a percentage point of obtaining the mandate for independence, with 49.6% of votes. What followed sent shockwaves in the Belle Province: the Quebec prime minister and leader of Parti Québécois Jacques Parizeau claimed that independence was lost due to rich people and “the ethnic vote”.

The young Samir was not about to forget this brutal assessment. On his first skit in French at the Just for Laughs comedy festival in 2009, he joked that it then occurred to him how close ethnic minorities had come to becoming slaves in an independent Quebec. He then added: “If that ever happened, there would be a good chance that my master would be poorer and less educated than I am.”

In his current show, Sugar Sammy ridicules a botched secular scheme that had intended to prohibit ostentatious religious signs from the provincial state sector …but not the crucifix in the parliament in Quebec City. “What was that?” he quips on stage. “No hijab, no kippah, no turban … but the mullet hairstyle is still legal in Quebec! Where is the justice?”

His jests are delivered with such timing and skill that French Quebeckers simultaneously laugh and cringe at their own idiosyncrasies.

The comic says he has no other pretension than to deconstruct some prejudices we all have. “The fact that I'm up on stage, making jokes about the typical Québécois with the background that I have is a statement on its own”, he suggests. “I too had prejudices about francophones living in the countryside, commonly called the “regions”. I was scared to go to some of these places and mock separatists. It turns out they are the warmest people I've ever met.”